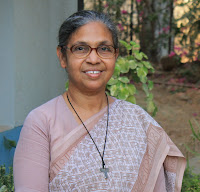 Daughters of the Cross run  the Dayasadan Davakhana in Zankhvav, South Gujarat. Dr Sr Annette Fernandes ( Batch of ’78) has been holding the fort there for the past 27 years. An astute clinician, she has worked with meagre resources treating all kinds of clinical cases, often being the only qualified doctor in the entire region.

The region itself has seen improvement in the last few decades, a far cry from the time patients used to be brought in cloth cradles on bamboo poles.
With a strong commitment to community health programs, the Centre has been consistently awarded the best healthcare organisation in the NGO sector in the last few years. Sr Annette has also been organising camps at her centre; she is especially proud of the one where a group of Johnite doctors- Gary Chen, Dominic Lobo, Dr Srs Angela, Roshni, Shiny etc came over to help her.  The next camp in April 2012 is for children with cleft lip/palate where a group of doctors from Surat are coming in.

One of the outstanding contributions of Sr Annette has been in the field of sickle cell anaemia. Noticing the numerous cases of sickle cell anaemia, especially in crisis, she wrote up a proposal for large scale screening of the community. From the years 2002-05, in addition to her clinical work, she systematically screened 100 villages with health workers and established a comprehensive registry of all the inhabitants, showing people with the disease and career traits. Due to the consistent follow up and counselling, there has been a marked decrease in the morbidity and patients coming in sickle cell crisis.

A clinician with a deep commitment to community and tribal health, she has also been the first to volunteer in times of crises like the Orissa super cyclone and the Gujarat communal riots (some of those experiences can be included in another post). Her fervent wish at present is for another doctor at her centre, freeing her for some time to work in the outreaches with the tribals.